skip to main | skip to sidebar

Exhibition of French Paintings in Taipei

I'm looking forward to seeing works by the Barbizon painter Jean-Francois Millet currently on exhibition at the National Museum of History in Taipei. This show is a big event as it brings many important French paintings to Taiwan for the very first time; it also includes several of Millet's best known pictures. Millet's is a special brand of realism, and his images of peasant workers are unmistakeable. He also produced some remarkable landscapes, including this one, which has a visionary quality of light which reminds me of the English Romantic Samuel Palmer.

One of the most well-known poems by the American Edwin Markham (1852-1940) is a response to Millet's 'The Man with the Hoe' ('L'homme à la houe'), pictured above. Below I have included just the first stanza, in which Markham sees the worn-out man as an insult to God. In the two remaining stanzas the poet warns of dire future consequences if such people continue to be allowed to suffer. Millet on the other hand, always said he was not a socialist and claimed he had no political motivations, though his image was interpreted as a political statement when it was first exhibited.

The Man with the Hoe

God made man in His own image, in the image of God made He him.—GENESIS

BOWED by the weight of centuries he leans
Upon his hoe and gazes on the ground,
The emptiness of ages in his face,
And on his back the burden of the world.
Who made him dead to rapture and despair,
A thing that grieves not and that never hopes,
Stolid and stunned, a brother to the ox?
Who loosened and let down this brutal jaw?
Whose was the hand that slanted back this brow?
Whose breath blew out the light within this brain?
Is this the Thing the Lord God made and gave
To have dominion over sea and land;
To trace the stars and search the heavens for power.
To feel the passion of Eternity?
Is this the Dream He dreamed who shaped the suns
And marked their ways upon the ancient deep?
Down all the stretch of Hell to its last gulf
There is no shape more terrible than this--
More tongued with censure of the world’s blind greed--
More filled with signs and portents for the soul--
More fraught with menace to the universe.

Posted by Mike Hemsley at 09:07 No comments: Links to this post

The very first thing I did after taking a nap today was to look at Tim's blog. And then this happened, and quite quickly - it is just what happened - and it's for you Tim.

Nostalgia - tunnel in the gardens -
forest of
antipodean roots
where red and black
converse. Straits made apart
yet vertebrae on each side alike
a dive 'snip'
and 'snap' - brock
is still there. 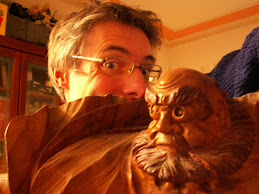 It's just about this and that really. What's this and what's that? I'll let you decide!

Underlined words and phrases in the blog entries are hotlinks, you can click on them to read or see more.